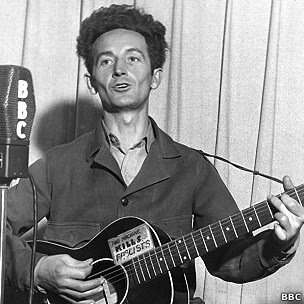 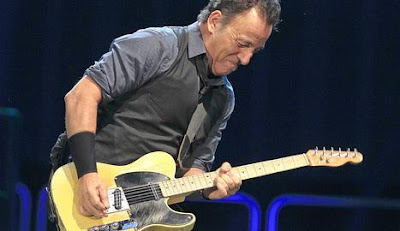 Bound for Local Glory at Last 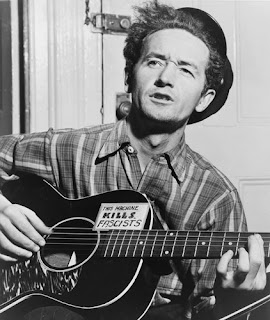 TULSA, Okla. — Oklahoma has always had a troubled relationship with her native son Woody Guthrie. The communist sympathies of America’s balladeer infuriated local detractors. In 1999 a wealthy donor’s objections forced the Cowboy Museum in Oklahoma City to cancel a planned exhibition on Guthrie organized by the Smithsonian Institution. It wasn’t until 2006, nearly four decades after his death, that the Oklahoma Hall of Fame got around to adding him to its ranks.
But as places from California to the New York island get ready to celebrate the centennial of Guthrie’s birth, in 2012, Oklahoma is finally ready to welcome him home. The George Kaiser Family Foundation in Tulsa plans to announce this week that it is buying the Guthrie archives from his children and building an exhibition and study center to honor his legacy.
“Oklahoma was like his mother,” said his daughter Nora Guthrie, throwing back her tangle of gray curls as she reached out in an embrace. “Now he’s back in his mother’s arms.”
The archive includes the astonishing creative output of Guthrie during his 55 years. There are scores of notebooks and diaries written in his precise handwriting and illustrated with cartoons, watercolors, stickers and clippings; hundreds of letters; 581 artworks; a half-dozen scrapbooks; unpublished short stories, novels and essays; as well as the lyrics to the 3,000 or more songs he scribbled on scraps of paper, gift wrap, napkins, paper bags and place mats. Much of the material has rarely or never been seen in public, including the lyrics to most of the songs. Guthrie could not write musical notation, so the melodies have been lost.
The foundation, which paid $3 million for the archives, is planning a kickoff celebration on March 10, with a conference in conjunction with the University of Tulsa and a concert sponsored by the Grammy Museum featuring his son Arlo Guthrie and other musicians. Although the collection won’t be transferred until 2013, preparations for its arrival are already in motion. Construction workers are clearing out piles of red brick and wire mesh from the loading dock in the northeast end of the old Tulsa Paper Company building, in the Brady District of the city, where the planned Guthrie Center is taking shape. The center is part of an ambitious plan to revitalize the downtown arts community. 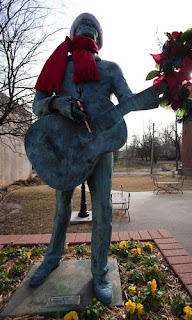 Now that the back walls are punched out, workers trucking wheelbarrows of concrete can look across the tracks to the tower built by BOK Financial, which George Kaiser, whose foundation bears his name, presides over as chairman. Forbes magazine ranks Mr. Kaiser as the richest man in Oklahoma and No. 31 on its Forbes 400 list.
Ken Levit, the foundation’s executive director, said he thought of doing something for Guthrie after the Hall of Fame induction. Nowhere in Tulsa, he said, is there even a plaque paying homage to this folk legend, who composed “This Land Is Your Land”; performed with Pete Seeger and Lead Belly; wrote the fictionalized autobiography “Bound for Glory”; and sang at countless strikes and migrant labor protests in the 1930s and ’40s. Mr. Levit began a more than three-year campaign to win the consent of Ms. Guthrie, who had taken custody of the boxes that her mother, Marjorie Guthrie, had stowed away in the basement of her home in Howard Beach, Queens.
Ms. Guthrie, who as one of Guthrie’s youngest children, didn’t really know her father until Huntington’s disease began to rob him of his sanity, movement and speech many years before his death, in 1967, said she only rediscovered the kind of man he once was when she started to page through the boxes about 15 years ago.
“I fell in love through this material with my father,” Ms. Guthrie, 61, a former dancer, said from her office in Mount Kisco, N.Y.
Her older brothers Arlo and Joady were happy to have her take custody of the papers. Of Arlo, she said, “He was filled up with being Woody Guthrie’s son, so he was glad the responsibility moved to me.”
She said the information contained in the archives can clear up misconceptions about her father that she has frequently heard at scholarly conferences and read in articles, including that he didn’t write love songs or sexually provocative lyrics. She has also opened up his notebooks to contemporary musicians like Billy Bragg and Wilco, Jackson Browne, Rob Wasserman, Lou Reed and Tom Morello so that they could compose music to her father’s words.
One of those artists, Jonatha Brooke, is starting off the Guthrie Foundation and Grammy Museum’s yearlong centennial celebrations on Jan. 18 at Lincoln Center with a concert of new songs she wrote for the lyrics. 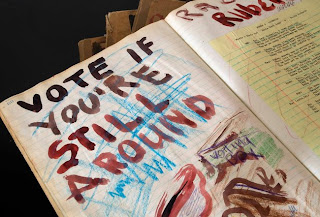 Woody Guthrie’s music has also had added play time this year as Arlo Guthrie, Mr. Seeger, and other musicians have sung his protest songs at Occupy Wall Street demonstrations in New York and elsewhere.
While this poor folks’ hero and the richest man in Oklahoma might not seem to have much in common, Mr. Kaiser’s foundation, with its $4 billion endowment, is dedicated to helping Tulsa’s most disadvantaged. “I cried for an hour after meeting George Kaiser,” Ms. Guthrie said. “This uts together what I’ve always dreamed of.”
Brian Hosmer, a history professor at the University of Tulsa who is organizing the March conference — ironically titled “Different Shades of Red” — said Guthrie’s legacy is contested in some quarters.
“There is no doubt there will be some voices in opposition to the way Guthrie is being emphasized — Oklahoma is about the reddest state you can have,” Mr. Hosmer explained, referring to its conservatism. “And when Woody Guthrie was a boy, Oklahoma was also the reddest state because we had more socialists elected to public office than any other.”
Guthrie always said he was influenced by the songs he had heard his mother sing in his hometown, Okemah, about an hour’s drive from Tulsa, with a population of 3,000. His radicalism offended local officials, who scorned Guthrie until an Okemah resident, Sharon Jones, decided to do something about it in the late 1990s. One of her cousins, an avid Guthrie fan, came to visit and was shocked there wasn’t a single mention of her idol. So Ms. Jones, who died in 2009, created the Woody Guthrie Coalition, which organized an annual folk festival, called WoodyFest, around his birthday on July 14, as well as a statue, a mural and a memorial. Sensitive to the area’s Baptist beliefs (including Ms. Jones’s), no alcohol was permitted at the celebration until this year.
Dee Jones, Sharon’s husband, explained that Guthrie “was kind of taboo because some influential people in this town thought Woody Guthrie had communist leanings.” But once the community realized that the 3,000 or so attendees brought in business, everyone got behind it, Mr. Jones said.
A couple of blocks from the memorial statue, visitors can run a finger along the fading letters “W-O-O-D-Y” on a fragment of Main Street’s original sidewalk, where the 16-year-old Guthrie signed his name in wet cement in 1928.
Mary Jo Guthrie Edgmon, Woody’s 90-year-old sister, always hosts a pancake breakfast during the four-day music festival. A white-haired, elfin woman with a persistent smile and a sharp wit, Ms. Edgmon remembered how her brother was always making music.
“You’d sit down at the dinner table, and there’d be glasses of water, and he’d pick up a fork and play the glasses all around the table,” she said. “If it made music, he played it.”
Reciting snatches of Guthrie’s poetry and songs, Ms. Edgmon said her brother never cared what people thought of him and did not necessarily hold a particular affection for his birthplace. “He didn’t get attached to anything,” she said. “Everywhere was his home.”
Still, after so many years of Oklahomans’ snubbing her brother’s memory, she said the whole family was thrilled he was being honored: “What we were all shooting for,” she said, “was acknowledgment.”By PATRICIA COHEN, NYT. Aquí una versión en español, Woody Guthrie. La tradicional River Valey. Con sonido de harmónica.
Publicado por Antonio Peña en 5:44 No hay comentarios: Enlaces a esta entrada

Woody Guthrie, This Land Is Your Land

Songs Of The Lincoln Brigade


Three-verse versions: Jarama Valley / El Valle del Jarama
This shorter (three-verse) version of the song—with variant versions —are something of an anthem for veterans, particularly those from the Abraham Lincoln Battalion. Woody Guthrie and Pete Seeger have recorded it. In addition to this version, other Spanish variants exist.

There's a valley in Spain called Jarama
It's a place that we all know so well
It was there that we gave of our manhood
And so many of our brave comrades fell.

We are proud of the Lincoln Battalion
And the fight for Madrid that it made
There we fought like true sons of the people
As part of the Fifteenth Brigade.

Now we're far from that valley of sorrow
But its memory we ne'er will forget
So before we conclude this reunion
Let us stand to our glorious dead.